My Book Collection and A Peek of my Favorites

As I was about to sleep last night, I happened to look past at my bookshelf and thought of maybe sharing this small, but incredibly good books that I have read over the years. I will also give you a bit of backstory of how I got them and a peek of my favorites.

I kind of started this reading habit around 7 years ago. Since I was a lazy student, I don’t really read academic books because well, studying isn’t just my thing. LOL! That’s why I’m surprised that I have grown to read books after reading my first few novels. Sadly, I now realized that almost half of my collection weren’t here anymore. There are lots of unreturned and misplaced books. But still, I hope you would take a look at this few but loved collection I am left with.

As you can see, majority here are all mainstream novels because I only read books that are mostly recommended by my friends…and google. Probably some of these have movies adaptation already. But as they say, nothing feels as good as a book in our hand, so I always keep looking for the hard copy. I just love the way they smell, the way they feel, and they are pretty much one of my favorite thing.

Here’s every section of my favorites!

The first novel book I ever had was The Fault In Our Stars by John Green. I had it a year later after its released. It’s also the same book that got me into this reading habit thing. That’s why the first few books on this collection are mostly by John Green and then his novels bridged me into knowing David Levithan because I’ve read their collab novel Will Grayson, Will Grayson. And that’s how I then started buying both of their books. The only missing on this section, that was borrowed and never returned is the An Abundance of Katherines. I have also read Let It Snow but wasn’t able to get myself a hard copy.

Most of my favorite book series were not returned and this is the part of this post where I’m kind of sad and mad because now, I realized its importance. But I hope they’re in good hands, though.

The Selection Series by Kiera Cass

There is so much to love on this five-novel series. When I first read The Selection, that I borrowed from my college friend, I have fallen inlove with it right away. So, I decided to bought the first three released of this series which was sold by National Bookstore in a bundle. They are just so pretty on the shelf. It’s hard for me to ignore them. I even had to sacrifice a week allowance just to buy the bundle and I never regret it. Okay damn, I just remembered I don’t have them already.

When The Heir was released on 2015, I also bought it immediately but it took me a long time to get invested on the story, maybe because it’s from a new perspective so I shelved it for awhile. It was 2016 when I finally read it again and actually finished it. And that was it. I haven’t read the last book of this series anymore because I got busy with graduation and my first employment. Still, it’s my first favorite series.

Shatter Me Series by Tahereh Mafi

Have you ever read a book that you read a line twice or thrice just to feel every words on it because of how it is beautifully written? I do. The Shatter Me series did that to me. I bought this books online so they are cheaper. Yes they are secondhand, but they are all in good condition when I got them on the mail. And I have read them five times already. Although I know there are few Tahereh Mafi books that were released in connection to this series, I haven’t had the time to check on them and get myself a copy. Plus, I don’t know which one to get first after Ignite Me.

A section of my other favorite books and authors

The Alchemist by Paulo Coelho – I have already read this book even before a hard copy was given to me. This is usually on top of my choices if I want to reread something again.

Rainbow Rowell – I actually bought a few of her books. I had Fangirl, Landline, and Attachments. I’m just happy that Eleanor & Park wasn’t misplaced because it’s my most favorite of the four.

Ugly Love by Colleen Hoover – this is the first book that I have of Colleen but some of my friends told me to check her other novels. Do you have recommendations?

If I Stay by Gayle Forman – I got the first edition of this but I get to watch the movie first than finishing the book itself LOL!

Do you have any book recommendations for me to read? Or do you have your own collection of books? I’d be happy to read them. Comment them below. Also, I am more interested in novel books. No horror, please. 🙂 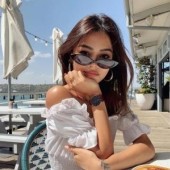